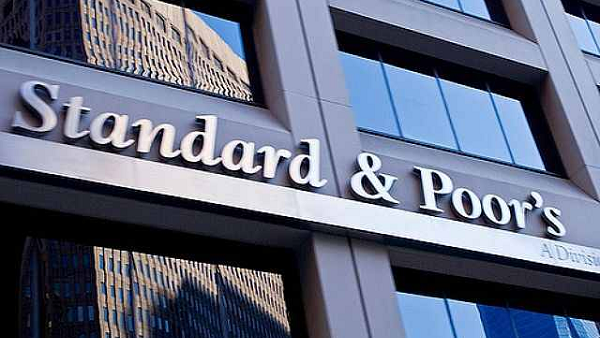 Saudi Arabia’s credit rating was cut by Standard & Poor’s , which said the decline in oil prices will increase the budget deficit in a country that relies on energy exports for 80 percent of its revenue.

S&P cut the sovereign rating one level to A+, the fifth-highest classification, as it said the biggest OPEC producer’s deficit will increase to 16 percent of gross domestic product this year. The nation’s credit outlook is negative as the decline in oil prices makes it difficult to reverse the fiscal deterioration, S&P said in a statement.

“Credit metrics for oil producers like Saudi Arabia are coming under pressure,” said Steve Hooker, a money manager at Newfleet in Hartford, Connecticut, who helps oversee $12.5 billion of debt. “It’s not likely to reverse until the oil prices go up.”

The widening deficit and a high reliance on energy revenue “point to vulnerabilities in Saudi Arabia’s public finances,” the ratings company said. Brent crude has plunged 27 percent from this year’s high in May amid a persistent global supply glut. Still, public debt in Saudi Arabia is among the world’s lowest, with a gross debt-to-GDP ratio of less than 2 percent in 2014.

“We could lower the ratings within the next two years if Saudi Arabia did not achieve a sizable and sustained reduction in the general government deficit, or its liquid fiscal financial assets fell below 100 percent of GDP,” Trevor Cullinan, a credit analyst at the rating company, said in the statement.

The Saudi Finance Ministry said it “strongly disagrees with S&P’s approach to ratings management in this particular instance.” The downgrade was “driven by fluid market factors rather than changes in the fundamentals of the sovereign,” which “remain strong,” the ministry said in a statement on the website of state-run Saudi Press Agency.

The country is rated Aa3 by Moody’s Investors Service, the equivalent of one step higher than S&P’s new grade. S&P’s classification for Saudi Arabia is the same as Slovakia, Ireland, Bermuda and Israel.

The decline in oil prices comes as Saudi Arabia opens its stock market, the largest in the Arab world, to foreigners for the first time. In June it relaxed rules to allow qualified investors direct access to stocks as part of wider government efforts to reduce the economy’s dependence on crude. The benchmark Tadawul All Share Index has plunged 28 percent from this year’s high in April.

S&P projects that Saudi Arabia’s general government deficit will decline to 10 percent of GDP in 2016, 8 percent in 2017 and 5 percent in 2018. It could widen to more than 20 percent this year after King Salman announced one-time bonuses for public-sector workers following his accession to the throne in January, the International Monetary Fund said this month. The biggest Arab economy may run out of financial assets needed to support spending within five years if the government maintains current policies, it said.